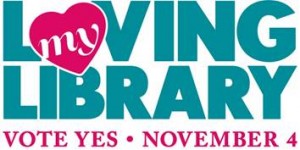 On November 4, 2014 (General Election Day), there will be a question on the ballot asking Kanawha County voters to approve or reject a new levy, which will provide funding for the continued operation of the Kanawha County Library System. A simple majority (50.1 percent) of the votes cast must approve the levy in order for it to take effect.

The Charleston Regional Chamber of Commerce has endorsed the levy and encourages Kanawha County voters to vote Yes on Nov. 4.

Provided is some information that helps to explain why the levy is on the ballot.

Q: WHAT IS THE PUBLIC LIBRARY LEVY ELECTION?

Voters are being asked to restore funding for the Kanawha County Public Library (KCPL) system. If approved, the levy will provide funds for the next five years to support the Kanawha County public libraries.  Specifically, passage of the levy would restore $2.9 million of KCPL annual operation and staffing funds lost after a 2013 ruling by the W.Va. Supreme Court.  Approval also will make levy funds available to libraries in South Charleston ($227,480) and Nitro ($51,000) during the first year. Levy funding will continue for five years.

One item of note: the Kanawha County Board of Education is the sponsoring agent this public library levy, but the school board will not receive any of the funds. Levy funds would be for library use only.

Q: WHAT DOES THE PUBLIC LIBRARY LEVY FUND?The $2.9 million in annual funds that would be generated by the levy will be used for the ongoing operation and staffing of the KCPL system, which consists of ten libraries and a Mobile Library. Some of the monies also will help support libraries in South Charleston and Nitro. None of the levy funds will go to the construction of new library buildings.

Yes.  Passage of the levy will result in the following: for someone who owns a home with an assessed value of $100,000 and a vehicle valued at $15,000, the increase would amount, generally, to $1.36 a month or $16.22 per year. These funds will help provide everyone in the county with the resources they need for education, enrichment and entertainment.

Q: HOW MANY PUBLIC LIBRARIES ARE IN KANAWHA COUNTY?

Q: With the rise of the Internet, are people still using the library?

The libraries also are an important resource for people who need to have access to computers and the Internet.

Q: What happens if the levy fails?