10 Reasons to Vote For the Safety Levy 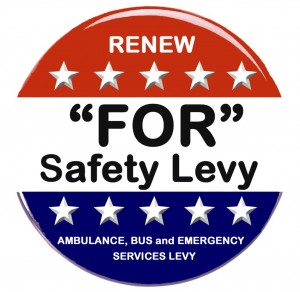 On May 13, voters will have opportunity to support services on which we’ve come to depend by supporting the Ambulance, Bus & Emergency Services Levy. For nearly four decades, voters have voted “for” this critical protection plan, and this year, there are many reasons to continue the tradition.

1)    A vote for the safety levy means no tax increase. First passed in 1973, the levy would continue at the same rate, amounting to about 18 cents a day for the average household. If our friends and family are in danger, is rapid response worth 18 cents a day? The answer is clear.

2)    The Kanawha County Ambulance Authority would continue receiving the funding it needs to keep 40 ambulances out of 14 stations and three advance life support units on the road. Last year, they answered 53,451 calls. They respond to 90 percent of calls within eight minutes.

In addition, the Charleston Fire Department’s Ambulance Division responded to 12,000 calls for service and transported more than 9,300 patients. We can’t afford to see a decline in those impressive statistics. Imagine yourself in an emergency. When you dial 911, the levy funds insure ambulances will provide responsive, quality service.

3)    The levy will maintain funding for local fire and police departments, which receive more than $650,000 each year in public safety grants. The levy would prevent the loss of federal and state grants. Levy money goes toward matching those grants. No levy means no grants, and that means no funding with which to purchase body armor, communications equipment, digital cameras, ammunition and other critical tools police and fire authorities need to protect the community.

4)    The levy would prevent the loss of bus service for 2.8 million passengers on 22 routes each year. The Kanawha Valley Regional Transportation Authority operates bus service seven days a week. More than 60 percent of its budget comes from the levy. Without those funds, we will see reduced service for many who depend on public transportation to get to work, school, grocery stores and health care facilities.

5)    The levy will support buses used in emergency evacuation teams. KRT employees volunteer to assist local resident and agencies during emergencies requiring relocation. The team assists during chemical leaks and flooding, and the busses are an important component of homeland security plans.

6)    The safety levy would prevent an increase in ambulance fees. It provides more than 32 percent of the Ambulance Authority’s total budget. We would have to increase fees to cover the cost of an indispensable and vital service.

7)    The levy will maintain transportation service for the disabled. The Kanawha Alternate Transit program provides curb-to-curb transportation to individuals who mean the Americans with Disabilities Act of 1990 eligibility standards. The program allows thousands of such trips each year, and without levy funds, the service would experience a sharp decline.

8)    A vote “FOR” the levy would maintain automatic response for well-being checks and vehicle accidents.

9)    The levy would prevent the loss of jobs. KRT employs more than 140 people who depend on levy funds.

10)  Levy funds translate to quickness and efficiency that often mean the difference between life and death. The ambulance, police and fire forces are filled with men and women who make it their duty to protect our friends and families.